while leaving seattle this week and stripping down for the usual false sense of security check at the airport, i noticed a clever bit of advertising from a store that i frequent online.  you see everyone is asked to put their shoes in a bin now...here's what my bin looked like:

clever.  "place shoes here.  buy shoes here."  kudos to zappos for finding an opportunity here!  they are a great store and their 'piece o' cake' return policy is exactly just that.

it could be that december sucked and i was bored, or it could have been the pain killers, but i have found that the recent freecreditreport[dot]com television advertisements have been hilarious.

caveat: i am not promoting the service and i actually don't necessarily agree with it (as i think there is too much fine print involved and it isn't really 'free' but that is beside the point, this is about the commercials.

their latest one had me cracking up as the guy singing the jingle in what appears to be somewhat of a red lobster type restaurant ("they say a man should always dress for the job he wants, so why am i dressed up like a pirate in this restaurant"):

the previous one is about his girlfriend with bad credit ("so now instead of living in a pleasant suburb, we're living in the basement of her mom and dad's"):

there is another one about a new car, but i don't find that one as amusing.  the agency behind these is the martin agency.  who are they?  well, they are behind some of the more successful broadcast media campaigns around:

seems like a pretty talented agency balancing their abilities to serve different mediums as well as creative abilities catering to both the stiff corporate customers as well as enabling companies to see some humor in their own brands or bring something catchy to their advertising.

anyhow, nothing of significance here, just a random thought and appreciation for the creative talent.  i wonder what the martin agency could do for microsoft?

incidently did you know that the mac vs. pc ads (their agency is TBWA\Chiat\Day) are market specific?  check out the ones from the UK and Japan has some, but the link is bad now and i don't read japanese...but they featured a popular japanese comedy duo in their advertisements.

a video screencast that jesse and i collaborated on was just posted.  in the screencast jesse demonstrates the code we did to demonstrate a concept he calls "hypervideo" which is basically leveraging media metadata, and simulating retrieving related data information to display in the experience. 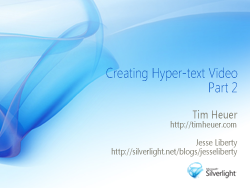 this concept is very similar to the experience at HSN.tv of showing "related products" using the metadata being streamed in their experience.  i hope you find it useful and if you have any questions, please let me know!

again, my goal is to try to help provide you with relevant information about microsoft web platform technologies like silverlight and enabling scenarios.  if you have a good idea (and aren't exactly sure how to go about it), send it my way as i'd love to help you and the broader community learn how to do it.

are these fully complete samples?  probably not.  they are intended to help you think and work through a portion of potentially your use of these technologies.  if they suck, let me know.