What is the use case for when you would want to use a Pano versus Pivot application layout?

I asked this in the context of an application for Yelp that I was writing.  Information was similar but not identical.  It was only similar in the sense that the data was all about user reviews and venues.  In my eyes I saw this like the fact that games are similar in that they are games, but their individual information (the play) is different.

I guess I was expecting a definitive or clear view on when to use either given my use case I presented.  I laughed as I collected numerous various viewpoints from all areas of the dev platform folks.  It was clear there was no clarity for me.  I actually have saved the most concise definition the discussion generated and had been wanting to blog about it for a while.

Today, Jaime released a bunch of videos from a ‘design days’ event that was held in Redmond for Windows Phone developers.  They are all great, but there was one that caught my eye: Windows Phone Design Days – Pivot and Pano.  In this video a few UX researchers walk through some of the key tenets of each control.  Here’s some of my mental notes:

There was some good information in this video (like don’t use pivot/pano for wizard-based UI) and one of the better descriptions/examples of answering my root question.  The other videos are great and I encourage you to take a look at them.

I’d encourage you to take a look at all of these videos to get a good sense on some of the user experience research done for Windows Phone developers and how you can learn to target a great experience in your app/game.

The feedback from the Silverlight 4 application themes released and the latest in process have been overwhelmingly toward the positive.  We appreciate the feedback and hopefully you appreciate the transparency in the process.  As a developer I want my fellow brethren to appreciate good design and use it whenever possible … even as a default if you don’t have designers on board.

In the initial release we had some issues getting the RIA Services ones out at the same time but we’ve got those finished now for Silverlight 4 Business Application Template.

NOTE: If the page still says version 1.0, then refresh a while or wait a bit.  Seems our servers have been having a bit of caching issues lately.

At the link above you’ll find 3 files to download:

We had an issue with the VSIX format (VSIX is the community installer format for Visual Studio to make deployment of things like templates a bit easier) and the RIA Services templates, so for now it is a manual copy process (see the README_FIRST file for location).  Thanks to Corrina, Tsitsi and Deepesh for their help in refreshing these templates!

ETA on the new template will be a few weeks.  I’ll post updates of the progress likely on my Twitter feed.

it’s that time again…beginning of a new month!  That means that Smashing Magazine has released their monthly wallpaper pictures again. 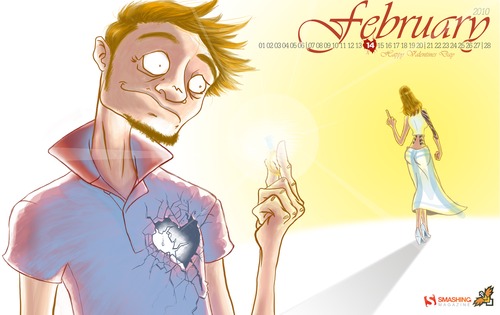 As you could expect, February entries are full of a lot of Valentine type stuff.  Here are your February Windows 7 Theme Packs for the wallpapers though…including all images (note: some ‘without calendar’ images are not provided by the authors) unfiltered.

There is an issue with the .themepack file for some reason.  Although I’m using the prescribed mechanism for creating these it is not functioning as easily as the January one.  I’ve got some folks on the Windows team looking into it, but no resolution yet.  In the interim, you can extract the .themepack file using 7-Zip (a free and great utility) and then double-click on the .theme file where you extracted it.  This should trigger the installation of the theme.

For details on these and to see past ones, visit the Smashing Magazine Windows 7 Theme information for the specifications I used for the theme pack as well as previous themes.  Want to participate and submit yours?  Join in!

One of the cool features of Windows 7 is the theme packs that are available.  I’ve been rotating between Bing’s Best, United States, Italy and Russia themes.  Great photography (and some have cool sound packs too).

Each month Smashing Magazine, one of my favorite online subscriptions, puts together a set of desktop wallpaper for the month with calendars on it.  These images are from various worldwide contributors.  Smashing Magazine is primarily a site for design (and does focus a lot on web design, etc.) and is a great resource for any one who appreciates design aspects.  They also provide free fonts, icons, web templates, etc. from time to time.

Anyhow, I’m fond of their monthly post of wallpapers to see what people come up with.  This time I figured: why not make a Windows 7 Theme out of these?  So I did.  Simple enough.

So here you go: Smashing Magazine January 2010 Desktop Wallpaper Windows 7 Theme (I contracted Microsoft marketing to come up with that name).  This is a widescreen theme as most of the wallpapers are widescreen – I think three in this set aren’t so when they rotate they may look weird, but I didn’t want to exclude any of them.  The sound for this pack is the Windows Default so if you want to make tweaks to it for your own liking, go for it.  I did, however disable the Start Navigation sound!!!

Since we appear to be in another revolution on user interface (UI) design and user experience (UX), I’ve seen a lot of people, companies, sites refer to the designer-developer workflow, including Microsoft.  Heck we’re building tools around it for Silverlight and WPF development!  One thing I see too often though is the conversation being diminished to UI only.

I’ve heard conversations between developers saying things like yeah, now we just need a designer to make things look pretty or we take what the designer made pretty and put functionality behind it.

I have a plea for my developer brethren: please stop using the word pretty and diminishing the role a designer plays in defining UI/UX.

To me when I hear this I cringe for two reasons.  First, while I’m not a designer, I consider myself to have a strong appreciation for design and know that it isn’t easy to execute on a design for everyone.  Second I know many talented people in the design world who understand much more about how UI affects end user productivity and emotion more than just ‘making it pretty.’  So please stop, it’s insulting to the trade I think.

Imagine if you heard a conversation of designers…

Designer A: Sweet design man, I love how you anticipate the user’s next interaction and use the typography to really identify that action.
Designer B: Yeah, it took a lot of research and usability observations, but I think we got it right. I hope the developers can finish this up so we can get it in the user’s hands.
Designer A: Totally, I’m sure they’ll finish the macros soon, I think it’s all wizard based anyway.
Designer B: Yep, I mean, I’ve created an Access application before, how hard can it be.

Yeah, see what I mean?  If you are insulted by hearing someone talking about the development craft reduced to macros and Access, then you should realize you’re doing the same thing.  Design is a craft just like software development and there are patterns and meaning to things that designers do, both in interactive design and print design.  It isn’t just about picking the right template.  Sure, palettes and animations are a part of the design, but their intent in the final design usually isn’t without thought.  Reducing a designer’s craft down to a simple “pretty” isn’t cool…at all.  And I’ve been guilty of it.

If you want to work with a designer, then do it, but don’t hand them your finished product and ask them to make it pretty.  Make them a part of the process and have them help identify the right UI/UX for the application.  I realize it isn’t easy and sometimes isn’t possible to always have a designer, but when you have that need, just make sure you respect the trade or don’t be surprised if you get this book in the mail.  Take a moment and learn what makes good design.  For a start, watch Robby’s session from MIX08: Design Fundamentals for Developers.

I’ve got it off my chest…and I leave you with this: