i'm a food nut.  i pride myself on my ability to eat everything in sight.  seriously, i will.  i'll at least try something once.  there hasn't been anything presented in front of me that i haven't tried.  i'd probably draw the line at coagulated blood pizza or anything else presented on fear factor.

one of the only reasons i have cable television is for the food network.  when i first got married my new wife (she's still my wife, btw so i'm not sure why i'm classifying here here as new) was annoyed at my infatuation by a (then unknown) chef named emeril.  it was pretty much the only channel i watched.  i like to think that my nielsen ratings usage helped propel the food network into stardom...hey, i can dream can't i?  i watched all the food celeb up-and-comers, but one reigns supreme above all others (a close tie between him and bobby flay) and that is alton brown.  if you ever want to know anything about food, you should immediately set your tivo's to 'good eats' right now.  the man either has incredible writers/researchers or is immensely knowledgeable...and i vote for both.  regardless, the show is entertaining (as much as food shows go, i mean there are no special effects that blow up cars or anything) and informative.

alton also started a new show last year that has a 'season 2' this year entitled 'feasting on asphalt' and is him and a bunch of other motorcyclists traveling across areas of the united states in search for unique food stops.  what i like about this show is it is a little less scripted, a little more raw, but still core to the main character: food.  it takes me along a journey with them (did i just say journey?) and i like it.

but as i started to watch this second season, i began to realize that i wanted more from the shows.  i wanted more about the areas that ended up on the cutting room floor.  but most of all, as a geek i saw too much potential go to waste about what they were doing.  how are the cameras hooked up on the motorcycle?  how are they getting good audio from the cyclists from the handhelds as they are driving?  where is the exact route on gps?  etc.  it made me think more about what that show (and network) could do.  here's my ideas.

i noticed that they do have media content on their site.  guess what...it is WMV format!!!  when i go to the site on windows in IE i see: 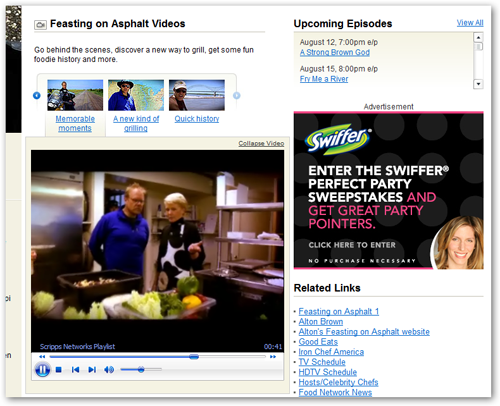 see the embedded winmedia player?  all is well.  however when i view in firefox (note: same for ff/safari on mac) i see:

note the win media plugin is not there.  side note: notice the flash requirement to display a list of shows in the upper right?  c'mon flash for simple text?  surely there isn't a need for that...simple css should work here for what they are wanting to accomplish.

at any rate, with an investment already in windows media formats, i'd love to see the food network adopt silverlight for their media playback areas...someone should probably talk to them...or if you know anyone there, give my number :-)...i'm happy to set up a 1:1 with alton brown to explain the merits of silverlight given their existing windows media content :-).  i'm a horrible designer/creative, but with 5 minutes of cut/paste: 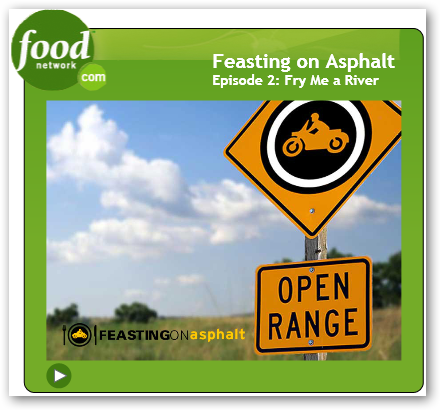 watching this show and thinking through some things made me really refine an idea of mine and colleagues we've been noodling on for a while...more on that soon.