While you can do a lot within Silverlight with effects, as demonstrated by techniques used like seen in Shine Draw, you may also want some helping hands to implement these.  It’s not always fun to write some code for when you just want to be able to drop in an effect on your application.  You want to concentrate on your application logic and get assistance in creating some of the visual effects.

If you didn’t know, there are some libraries out there that can help.  I’ll highlight two of them here (if you know of more, please post in the comments).

This library from Cellbi provides various effects in their library that you can see on their demo site.  Included are:

They are pretty interesting and you should check them out.

Don’t know who Nikhil is?  Well for one he’s wicked smart.  He’s a principal architect at Microsoft working on a lot of different things and his work is seen in a lot of ASP.NET.  He’s implemented some effects into a library he calls Silverlight.FX.  Included effects/transitions are:

You can view these in action on Nikhil’s sample page and read about the framework as well as download it here.  I’m always amazed at the stuff he comes up with.

So two pretty good effects libraries you can play around with.  Have fun!

thanks to mike ormond for prodding me about updating the msdn search sidebar gadget.  i had found this issue as well myself when i realized it wasn't working anymore.  well, it was because msdn went through a redesign and their urls changed...so much for scraping :-)

well, i updated mine and i'm sure nikhil is swamped and may not have a chance to update his (and i didn't want to redist his code, but here's what i did).

on mine you can just download the new one here: MSDN Search Sidebar Gadget

when i say "mine" it is just a basic typical gadget.  nikhil's was written using his Script# which is fantastically awesome.  he also has some UI updates.  which one is better?  they both yield the same result...i actually use nikhils because his UI is better...i'm merely updating mine here for the masses (same download link).

on to nikhil's changes required.  if you want to just update the currently installed one, go to C:\Users\<youruserid>\AppData\Local\Microsoft\Windows Sidebar\Gadgets and look for the installation point.  on my machine it is called "MSDNSearch.gadget" and open that folder.  in there you will find an MSDNGadget.js file.  go to line 26 and change:

boom, then you are done.  if you want to modify the script# project, then open the MSDNSearch.cs file and make the same change to the SearchUrlFormat private string on line 13.  then you can recompile and all is well.

hope this helps...and thanks for the nudge mike!

nikhilk has evolved his tool over time and in the latest version has awesome support for reading JSON encoded information and visual representing them in a helper way so that you can see what is going on.  as an example, here is one such view: 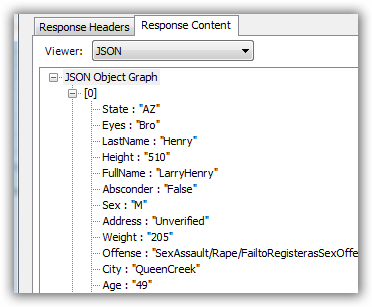 well, those that have been running vista may have been running into problems using nikhil's tool if you are either running under UAC-enabled or possibly running internet explorer as an administrator (run as administrator mode).  this may have resulted in the web development helper a) not even showing up under the tools options in IE and/or b) when you enable the toolbar, all you see is a gray area with nothing helpful :-).

well, after reading a bit into one persons attempts, i decided to quickly hack a reg setting to see if it will work (i was one such person that couldn't get it working under vista).  i'm happy to report that my results are favorable and i now have the great web development helper toolbar working under vista with UAC disabled.  yippee...i'm so happy i could cry.

i'm sharing the love so here is my reg hack file.  rename to .reg and merge into your registry.  WARNING: MODIFYING THE REGISTRY COULD CAUSE DAMAGE IF YOU DON'T KNOW WHAT YOU ARE DOING...PERFORM THIS TASK AT YOUR OWN RISK!