so up in the valley (the one of silicon, that is), they have very interesting and different ways of getting communities in the tech world together.  one of them they've dubbed the SupperHappyDevHouse.  i swear everytime i hear that said or even type it myself i can't stop thinking of saturday night live's tv funhouse: 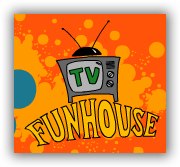 but i digress (again).  anyhow, what is supperhappydevhouse?  well, if you read the site it is described as:

DevHouse is not a marketing event. It's a non-exclusive event intended for passionate and creative technical people that want to have some fun, learn new things, and meet new people. In this way, we're trying to resurrect the spirit of the Homebrew Computer Club. We also draw inspiration from the demoscene as one of the only intentional getting-things-done computer events in the world.

so how do i interpret this?  bunch of geeks, someone's house, lots of laptops, ideas floating around, people helping each other, hack-a-thon.  think of it as a barcamp bbq perhaps.  so in the spirit of this, a few in the other valley (the one of the sun, that is) have organized the phoenixdevhouse.

so what is it?  didn't you just read above?  bring some grub that might taste good on a BBQ (one will be provided on site -- not sure if BBQ concierge is included though, so be prepared to cook it), bring some geek code, robots, whatever.  oh yeah, it will probably be like 138F outside, so if you want to stay cool outside, bring some swim gear (please, no speedos) as there is a pool.

so what could you expect?  your guess is as good as mine... i anticipate some conversations going like:

"dude, you should totally write a web app in ruby on rails to program your system in your pool!"
"nah, you'd need to open a web service endpoint on the pump valve so it would know when to go."
"yeah, you're right, but if we had ajax, then it would work."
"true, but why use ajax when you could do it all in flex?"
"or excel!"
"true dat, true dat."

or maybe something different.  it sounds interesting, it sounds fun...if anything come out and get to know some folks.  the information is all at the phoenixdevhouse wiki site -- be sure to add yourself as coming.  there is a lightening round scheduled as well to show some stuff to everyone.  here's some of the details:

sure, it's in queen creek, but if you haven't been to the 'crik in a while, you don't know what you are missing -- we have safeway's and stuff out here now.  here's a map of where it will be.