I had been a customer of T-Mobile for 10 years (through a few company changes) and only recently changed to AT&T about a year ago.  As a general assertion, I’ve been happy.  I like the 3G speeds and the coverage in my house is far better than T-Mobile, which was the ultimate driver as someone who works primarily from a home office.

That being said, I think I’m agreeing with what a friend said when the first iPhone launched.  He said (paraphrasing of course) If the iPhone has any shortcomings it won’t be because of the device or Apple, it will be AT&T and that could have been one of the worst decisions Apple could have made.  Now I’m not sure there is any “better” decision because in the US, mobile carriers all generally map to the same business plans.  But that being said, the first year of the iPhone seemed to be successful.  Sure, AT&T had the exclusive, but the plans were cafeteria style and relatively simple…you pretty much picked a minute plan.  I’m not arguing about any pricing, that’s for you to decide what is best for you.

As much as I thought Apple really had changed the game for US mobile carriers, I’m starting to rethink that.  I think the power of the mobile industry is proving itself.  Why?  Well, Apple may have still changed the game with regard to the actual device and maintaining the purity of the platform (i.e., controlling the platform completely), but the carrier (AT&T) clearly decided that the time is up for other aspects of control.  The iPhone 3G plans I thought had gotten simpler, but it turns out the key feature for the iPhone 3G, the “3G” part, is becoming the most confusing.

It should be pointed out that Apple has had varying business and personal plans for a while, but with iPhone they weren’t present because of the exclusive deal, all company discounts, etc. never applied.  And there was a flat rate for unlimited data.  Now it’s $30 for “personal” or $45 for “enterprise.”  First, I hate the word enterprise to define a company.  Is a 10 person company who uses a hosted exchange platform an enterprise?

Here is where the confusion begins.  Confusing and not-so-solid information on what the enterprise data plan will give you.  In an interview with some AT&T folks, NY Times columnist David Pogue asked the question to AT&T public relations personal specifically:

Q: Why is the business rate more expensive than the standard iPhone rate?

A: Business pricing for the iPhone is $45 for unlimited data, plus a voice plan. Business customers tend to be heavier users of data than consumers, and we price our service accordingly.

source: Questions — a Baker’s Dozen of Them — About the iPhone Calling Plans

So there is one answer.  Then there are others that say if you connect to an Exchange server you pay enterprise rates.  Well what about services that provide friend/family/small biz hosted Exchange platforms?  How is AT&T going to prevent these?

Here it seems just an added way to get an additional $15 from people.  Apple employee Nathan C responded on the forums discussion on this topic that:

The iPhone will support ActiveSync regardless of which data plan you are on with AT&T.

Sure, but is that only via WiFi, etc?  It’s an interesting thread from beginning to end to see peoples’ distaste for how AT&T is handling the plan changes.  And there in lies the rub.  Will iPhone 3G get a bad rap because of AT&T?  It already is in places like Canada because of Rogers pricing. 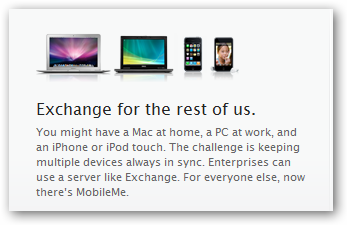 I don’t think AT&T is equipped to monitor handsets all day long to determine if rate plans should increase.  And how is MobileMe any different?  Heck Apple is marketing it as Exchange for the rest of us.  So if AT&T policy indicates that if you connect to Exchange you should pay the higher data plan, shouldn’t the same apply for MobileMe users?  I mean the services provided by MobileMe are similar and still include the push email features…so really it should be considered the same at a carrier service provider level.  And what about Google Apps users?  How is that usage any different?  It might not be push, but heck they even label it Google Apps for Enterprise (GAPE) – so subscribers of that should pay enterprise data plans too?  This segmentation is just confusing even to smart people.  And AT&T has yet to come out with a clear answer.  Now the clearest I’ve seen is one of two things: if you are getting a corporate discount provided by a corporate plan and/or if you sign up for a voice business plan.  Even still though, I’d bring up the smaller businesses that aren’t necessarily “enterprise” how we usually define those companies.

SIDEBAR: Apple keeps throwing Exchange around like it is Kleenex or something.  No service/trade mark attribution or footnoting on who owns that name…shame on them :-).

If you take the AT&T PR response on “heavier users” – seriously?  Grab a college campus popular kid and give him an iPhone 3G.  I bet it is heavier data usage than your average employee at any company.  That’s just a cop out.  It is a poor benchmark of terms that PR person chose in my opinion.

So I think my friend might be right.  AT&T really has the potential of screwing up the iPhone.  Carriers have had a trend of not really caring for what their customers needs are..it’s a highly competitive business and customer service isn’t high on the priority list most of the time (at least that has been my experience when I’ve needed it).  So with regard to the plan debacle, I’ll end with this open letter to AT&T:

Can you please clarify under what conditions the enterprise plan is required specifically?  For the companies who wouldn’t consider themselves ‘enterprise’ but still are able to take advantage of inexpensive hosted Microsoft Exchange for their companies (or purchase Small Business Server from Microsoft), why would they be lumped in with companies of 10,000 or more employees?

So bottom line it for us AT&T: If I have a personal data plan, will I be able to synchronize my email, calendar and contacts with my personal Exchange account that I either get for free or pay for via a hosted service?

Might I make a suggestion that you just come up with a single unlimited plan like you did with the iPhone first generation?  You made no distinctions there and yet ‘enterprise’ people were still able to get their mail.  If people who desire to use EAS over IMAP are penalized, that is ridiculous especially given that you’ve made no indication that a company choosing to use MobileMe or Google Apps for Enterprise would require such a distinction either.