My blog runs on Subtext which has a pretty good skinning model (albeit a tad outdated) and allows you to customize whatever you want.  I’ve had my own custom theme since 2009.  I figured I was due for an update.  I was further strengthened by a post from Jon Galloway last week.

There wasn't a vote, but if there was: I don't like narrow, fixed width web designs. Use media queries, scale intelligently on widescreen.

Now when I saw this I figured it was another nudge.  I did also have some time this weekend without any distractions so I took it as an opportunity to do some ‘work’ on this here blog.  Now a while back I was inspired by what Scott Hanselman had done on his site with a designer.  I reached out to a few designers that I admired, but frankly never heard back :-(.  I figured that was okay as I wasn’t in a position to really pay what I know it is worth for a good designer.  So I went looking for things on the web that I could do myself.  I did want some subtle design tweaks to represent some things I’m currently passionate about.

After some digging I saw a ton of pointers to Bootstrap.  This is an Open Source Javascript/CSS library that sets your site up for styling success and layout goodness.  The documentation was some of the better docs I’ve seen for a library.  Each aspect of the library/styles where in the docs that I could visually see, interact with and see the code that produced the behavior.  I liked what I saw and went to work. 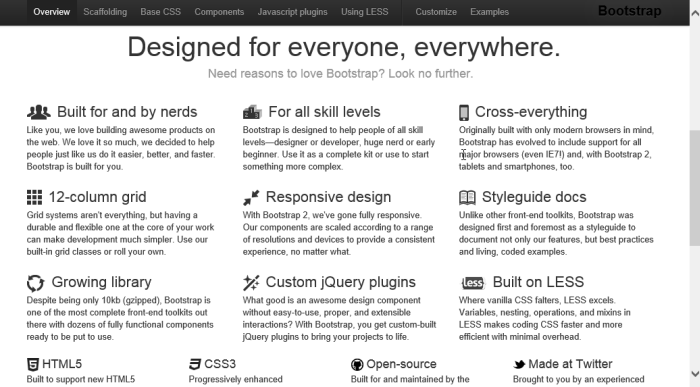 When I got all the styles configured (using the basic setup from Bootstrap) I went to work on some of my own minor tweaks.  One of the things I really liked is the responsive layout options, not only for the grid but also for different screen sizes.  By adding a simple class I can specify certain aspects that shouldn’t be displayed when viewing the site on a tablet or phone.  There were other cool responsive options for this such as the main menu will switch to a drop-down approach when on a smaller device.  Using Firebug, IE F12 tools and real devices I was able to get the precise tweaks that I wanted.  Here’s what my site looks like on an iPhone as an example: 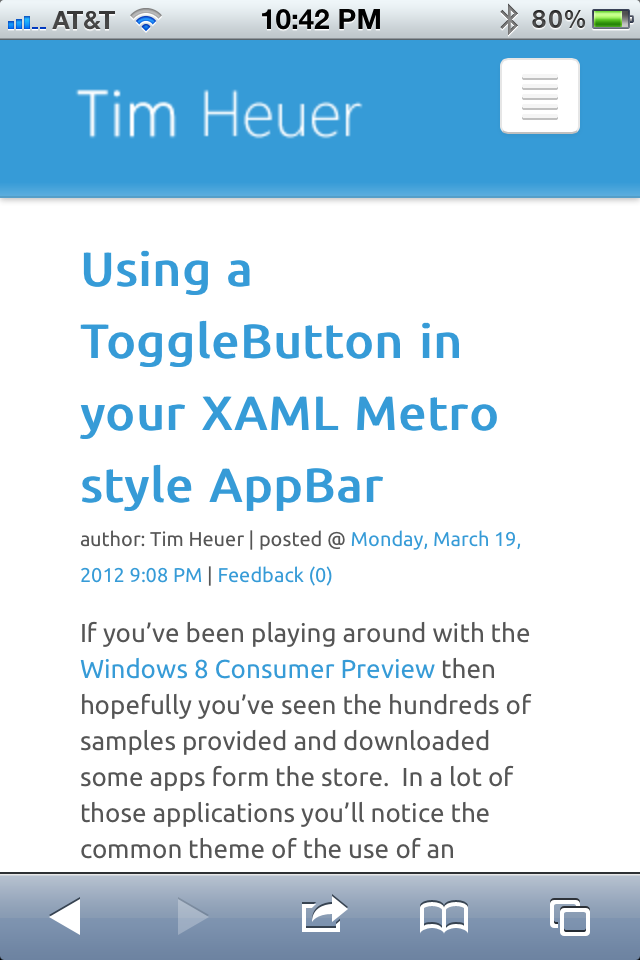 Notice the menu at the top is gone but replaced with a little icon (which is a drop-down).  Also notice the sidebar area is no longer visible (it is on the bottom of the site in this device view).  I like this subtle configuration that was really easy to do with just adding a class name to the area I wanted to collapse.

The other thing I wanted was to implement my primary navigation links in a little-more-than-text style.  I used the CSS sprite method by creating a single image that I would then define styles that used clips within that image to pull out the right area.  Here is the image in entirety:

Notice how the normal and hover states are the same image.

What I do then is just define a style for the <a> tag like:

Now I was having a bit of difficulty with this because I was misunderstanding the background-position value in CSS.  A quick set of second eyes with Shawn Wildermuth (who is doing a bunch of HTML dev posts right now) helped me realize my math was wrong and I needed to use the negative value instead of what I was using.  Once that forehead-slap moment was done, I was set.

I still have a few tweaks to go (need to re-work the comments sections but didn’t have the time to think about a design more) but I’m happy with the quick re-design.  It is very simple for sure, but I like it.  I tried on a few different screen sizes and I think I have met Jon’s challenge to adapt to the available space for the screen.  If you are working with a new site and aren’t a CSS/JS guru I highly recommend looking at Bootstrap as a solid starting point for your efforts.