i just put up another podcast video of how to "cheat" at creating a media player for silverlight.  have you been looking at some of these media experiences with all their fancy buttons and dvd player-type overlays, etc. but didn't want to take the time to code your own?  well, you don't have to :-) (man that sounds like an infomercial) 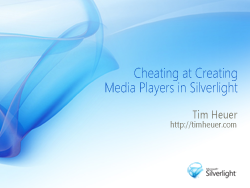 after you watch the podcast (subscribe links on the left panel of my web site if you are reading this in a reader), you'll hear me reference certain named elements for key function points of the player code that is generated.  i said i'd call them out here and that is what i'm doing :-).  these refer to the named elements in the xaml.  they could be canvas elements/groups or objects themselves like a rectangle.  as long as they are named specifically the code should work.  here's a list of the most popular that i've used and the heirarchy of any children objects they should have.  the names themselves are in bold, everything else is just description:

there are, of course, more elements to mess with and i'd encourage you to look at one of the more advanced template outputs and start sniffing around to see what you find.  the cool thing is that you don't have to have all of them.  you'll notice in the podcast that i only put 3 elements on there and there are no errors.  the output code handles if an element is there or not for you.

i hope this helps get you started on creating great media experiences with silverlight and expression sooner!  if you want the sample player xaml that i used in the podcast, you can download that here.