With the announcement of the Windows 8 Release Preview and matching Visual Studio 2012 RC I’m pleased to share some work that has been a result of my own personal app building, collaborating with some friends during their app building as well as porting some helpful projects that I’ve found helpful in my development.

Disclosure: At the time of this writing I do work for Microsoft, but this has been a personal effort from my own app development and during my own time (late nights and weekends).  I am not able to upload apps to the store at this time to share apps that I’ve written and receive no preferential treatment as a Microsoft employee.

Introducing Callisto, a toolkit of sorts for XAML Metro style apps.  When starting my own app building for the Consumer Preview, I realized there were some experiences and common things that I wanted to implement that weren’t existing controls in a way that I could easily re-use my efforts across app to app that I was building.  The foundation building blocks in the platform were there of course, as was a few existing Open Source projects that I could leverage (yay Open Source!).  I refactored the combination of these things into a single toolkit that I’ve been using for my apps.

My approach has been mostly pragmatic for me.  This was extracted out of app needs versus being designed as a toolkit from the beginning.  As such, it might feel like a ‘kitchen sink’ approach as there are things that you may never use.  For me, I wanted one thing I could add to my project and get all the goodness that I desired.  This is what led to a single project/toolkit rather than any modular approach.  For example, I originally had included the sqlite-net project in mine because I didn’t want to keep adding it to each project I was using the SQLite database engine.  This is one that I’ve removed since the changes I needed were contributed back to the project and I’ve wrapped them up in a nice easy NuGet package for that portion.

Well, it is a toolkit!  It is a combination of some helper libraries as well as some controls.  Some original, some contributed, some ports from existing toolkits.  If you look at the project page you’ll see that it currently has: 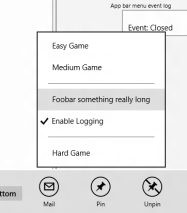 sample menu flyout from an AppBar

And more to come as I have time.  I’ve had the help of some folks in the community as well as being able to draw off things like the Silverlight Toolkit for some inspiration and some code as well!

The source project comes with a little crappy sample app that I’ve been using as my UI test harness.

I fully plan to clean this up to a better sample app, but it serves a simple purpose for now.  You can see specific uses in that sample app for some of the controls.  Otherwise feel free to email me directly for some help and I’ll try to point you in the right direction.

In addition to the source for those who would want that, you can get it in 2 ways: via NuGet or via the Visual Studio Gallery.  Incidentally you can install it both of these ways from within Visual Studio 2012 Express itself!  If using the gallery VSIX installer, then the toolkit will be available for you to use across multiple projects.  The NuGet approach is per-project (as it is with any NuGet package).  After installing the VSIX – if you use that approach – simply choose Add Reference in your project and navigate to the Windows…Extensions section and you’ll see it there.  It is implemented as an Extension SDK for Visual Studio. 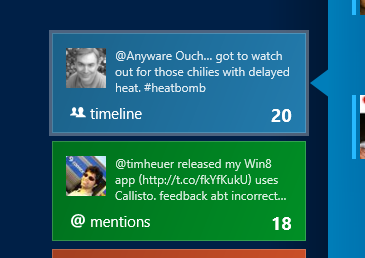 sample live tile (as best you can show in a static screenshot – imagine animation :-))

I plan on submitting regular updates as I refine things, fix bugs and add new controls.  Using the NuGet or VSIX approach for installing will help you keep updated as you’ll receive notifications of updates as long as you are using Visual Studio.

I found an issue/have an idea

Great, I’m sure there are some.  Again, it has been a few folks on our spare time working on this.  Please feel free to log a bug so that we can track the request.  The only place to log a bug is the Issues link on the project page.  No other mechanism will be a good feedback mechanism.

Alternatively, it is Open Source, so feel free to fork and fix.  Ideally you’d contribute your fix back to the project…we’d appreciate it.

At present the toolkit is for managed code Metro style apps only.  This isn’t because I don’t like C++ developers, but rather that this has been an extraction from my own app building and not designed from the start as any WinRT toolkit.

NOTE: There are a lot of things out there calling themselves WinRT toolkits for XAML.  So far I’ve actually seen none of them that are WinRT, but all are just regular .NET class libraries…just like Callisto.  These are all going to be restricted to use within a managed code XAML app.  If I can get assistance translating this all to WinRT native code, then I could easily see this being more valuable to others.

There are a lot of great APIs in WinRT available to developers.  The SDK samples also provide some helpful code for app developers as well you should ensure you look at (if you are doing ANYTHING with tiles, you should look at the Tiles SDK sample and pay attention to NotificationExtensions).  I hope that Callisto helps you as well in some small areas.